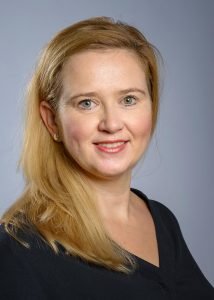 Fernand Braudel Fellow at the EUI, Florence (2017/18), Visiting fellow at Harvard University (Department of Government and Harvard Kennedy School of Government, 2008/2009), a Visiting scholar at Columbia University in New York (School of International and Public Affairs, 2008), in European University Institute in Florence (2013 and 2017/18 as Fernand Braudel Fellow), Cornell University (2016), and at  CERI Sciences-Po in Paris (Chercheur invité, 2009). During her MA studies she spent one year at Sciences-Po in Aix-en-Provence within the Erasmus-Socrates exchange program. Graduate of the Essex Summer School in Social Sciences and Data Analysis 2011 (regression analysis and comparative methods) and in the Institute for Qualitative and Multi-Method Research, the Maxwell School of Syracuse University in 2014. Within the STA Erasmus program she had guest lectures in University of Copenhagen, Aarhus University and Universidad de Barcelona.

Anna Wojciuk is a winner of the scholarship of the Polish Minister of Science for outstanding junior scholars, a winner of the Kosciuszko Foundation fellowship program (2008/2009). She received the Kukulka Prize for the best Ph.D. dissertation concerning theoretical aspects of IR (2010).

Department of Methodology of Political Science

A. Wojciuk, Empires of Knowledge in International Relations. Education and Science as Sources of Power for the State, Londyn, 2018.

J. Czaputowicz, A. Wojciuk, International Relations in Poland. 25 Years after the Transition to democracy, Londyn, 2017.