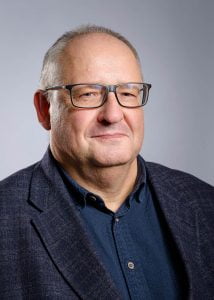 doc. dr Bohdan Kaczmarek – Graduate of the Faculty of Journalism and Political Science of the University of Warsaw (graduated with honours in 1979). Ph.D. of Humanities (1988). Employee of the Institute since 1979, currently Assistant Professor [Docent]. Member of the Council of the Faculty of Journalism and Political Science. Conducts classes in political theory, organisational political science, sociology of total institutions and dispositional organisations, organisation and management in public administration, strategic management, political strategies and political risk analysis. In the past, political and social activist. His former roles included: chairman of the District Council of the SZSP in Warsaw in the years 1980-1982, head of the Youth and Social Organisations Department of the Central Committee of the Polish United Workers’ Party (PZPR) at the turn of 1989/90, founder member of the SdRP and member of its national authorities. He was a member of the Programme Council of the Centre for Political Analysis headed by Professor Janusz Reykowski and of the Programme Committee of the left-wing bimonthly ideological journal “Forum Klubowe”, as well as of the Scientific Council of “Studia Krytyczne”. In addition to his scientific and political activity, he has experience in management. Head of the International School of Managers in 1991-1999, member of the Supervisory Board of KGHM “Polska Miedź” S.A. in 1994-1998 and 2001-2004 (Chairman of the Board), member of the Supervisory Board of Dolnośląska Spółka Inwestycyjna (1997-1999). Used to carry out expert and advisory activity in the field of organisation and management problems and analysis of political processes, including for the purposes of national and party structures, currently conducts training in management, management in public administration, strategic management, organisational power and culture, change management. Editor of several dozens of didactic and popular science publications on organisation and management, author of concept and manager of several projects financed by European funds as part of the PHARE programme. Member of the Presidium of RZ ZNP at the University of Warsaw.