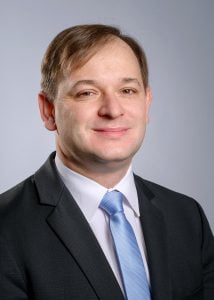 dr hab. Marek Madej, prof. ucz. – Ph. D. with habilitation (post-doctoral grade – Political Science, 2018, University of Warsaw), born in 1978, assistant professor in the Department of Strategic Studies and International Security, Faculty of Political Science and International Studies, University of Warsaw. Formerly also research fellow – senior expert on international security in Polish Institute of International Affairs (PISM, 2006-2010), an expert on security in the Chancellery of the President of Poland (2012-2013) and deputy director for research and international cooperation at the Institute of International Relations, University of Warsaw (2016-2019). He received a scholarships from governments of the USA (2009) and Japan (2017). Visiting professor at various universities in the UK (Univ. of Nottingham, Univ. of Kent), Ireland (DCU), India (Univ. of Manipal), Kosovo (UBT Pristina) and in European Security and Defense College. Member of the scientific board and editorial team of Rocznik Strategiczny and Stosunki Międzynarodowe – International Relations. Author of more than 100 scientific publications on various aspects of international security, including (as an author or editor) 10 monographs and collections, as well as several analyses for such institutions as Polish MFA, MOD or Chancellery of the President of Poland.


– NATO and other European security institutions

– terrorism and other asymmetric (non-state) threats