Guest lecture by Hernan Tesler-Mabé, Ph.D: “The Death of [Jewish] Europe in the Wake of the Holocaust” 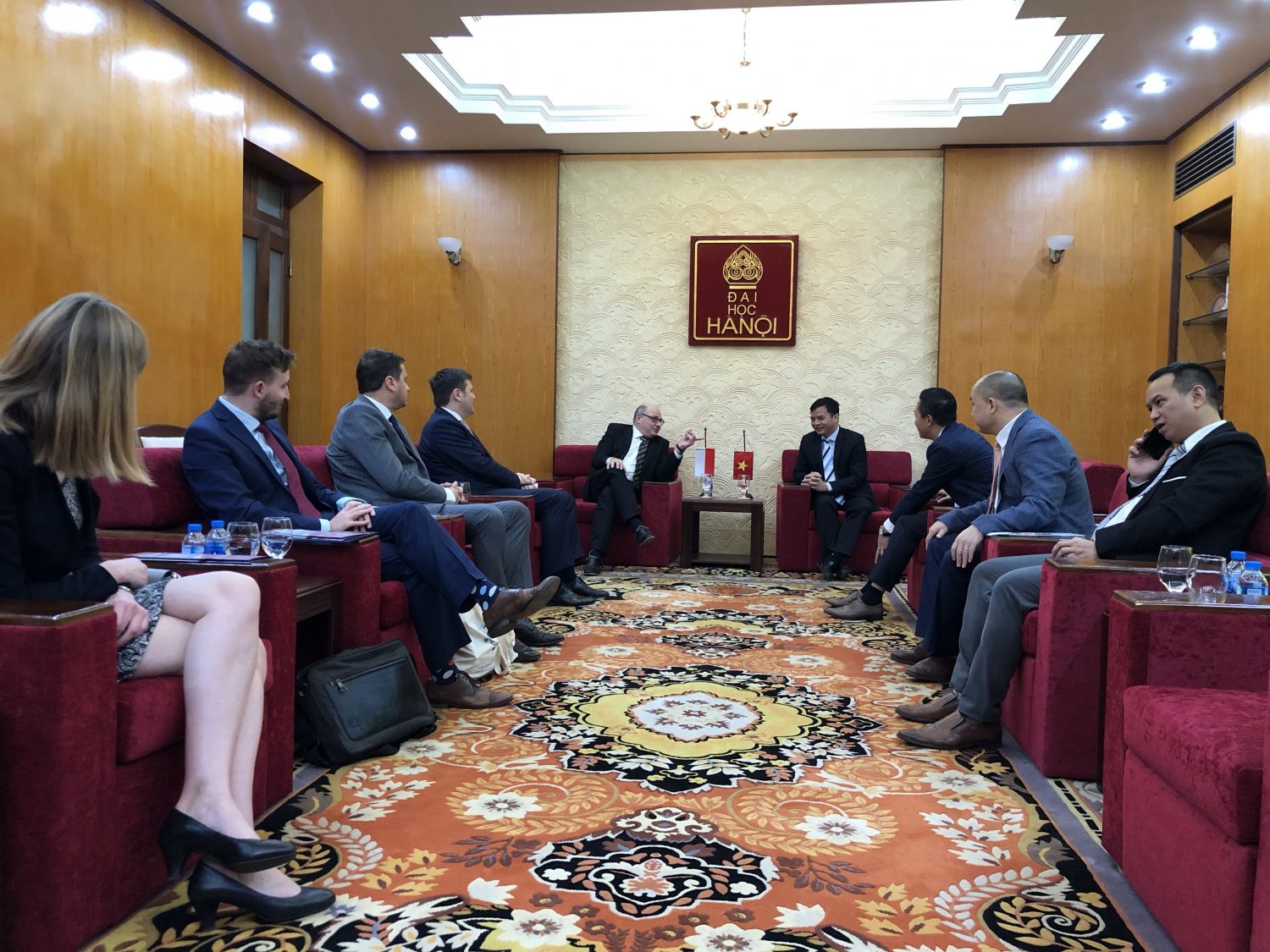 On November 5, Linda Masalska and Jakub Nowotarski visited two prestigious English-speaking high schools in Bangkok – Bangkok Patana School and NIST International School. During the visit, employees of the Faculty of Political Sciences and International Studies presented the offer of English-language studies and participated in meetings with persons responsible for international cooperation in the above-mentioned institutions. Then the entire delegation headed by dr hab. Daniel Przastek had a meeting at the Polish Embassy in Bangkok with the Polish Ambassador in Thailand Waldemar Dubaniowski. Adam Dyszlewski, who helped organizationally during the delegation’s stay in Thailand, was also present at the meeting. During the visit to the Embassy, the activity of the University of Warsaw in Thailand was discussed, as well as the issue of new opportunities arising from cooperation with LOT Polish Airlines, which sponsored the Faculty’s partnership with Asian universities. 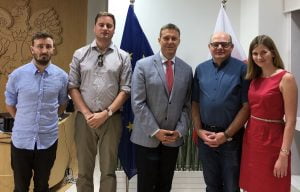 On November 6, the delegation visited the Royal University in Bangkok – Chulalongkorn University. Adam Dyszlewski was present on behalf of the Polish Embassy. The Royal University was represented by: Dean of the Faculty of Political Sciences prof. Ake Tangsupvattana, Deputy Dean Kasira Cheeppensook PhD, Pongpisoot Busbarat PhD from the Department of International Relations and Carl Middeton PhD, who is the director of the Center for Social Studies. Bilateral relations between universities were discussed during the meeting. In particular, they concerned cooperation on joint research and employee publication. 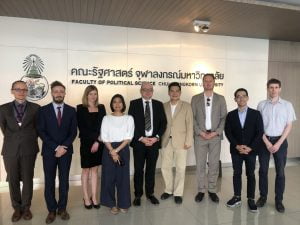 On the same day, employees of the Faculty of Political Sciences and International Studies visited Chulalongkorn University. At the university, our delegation was received by numerous representatives of the local University, headed by the University’s vice president for international affairs, prof. Prit Supasetsiri. The meetings were also attended by, among others Deputy Dean of the Economics Department of International Relations and Communication, Danai Tanamee PhD. After bilateral meetings and visiting the Faculty of Economics, Łukasz Gołota PhD gave a lecture for local students entitled „Polish Experience in the Economic Transformation 30 Years Later”. Then Prof. Ravipan Saleepon gave a lecture on “Improving the Thai Economy, Past & Future”. 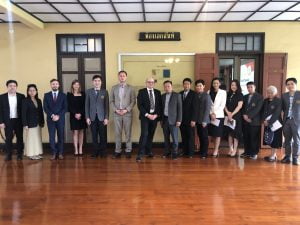 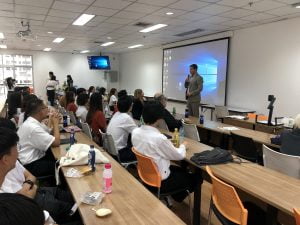 After visits to Thailand, a delegation from the Department of Political Sciences and International Studies went to the capital of Vietnam – Hanoi. Upon arrival, at the invitation of Wojciech Gerwel, the Ambassador of the Republic of Poland in Vietnam, employees of the Faculty of Political Sciences and International Studies took part in the inauguration of the Polish Cuisine Week. The event was an opportunity to get to know, among others Consul of the Republic of Poland in Vietnam Joanna Łasisz-Kaltekis, head of the Political and Economic Department Maciej Duszyński and Attache of Defense Colonel Tomasz Mazurek. Established contacts will allow in the future, among others cooperate efficiently on trips of Vietnamese students to study at the University of Warsaw. 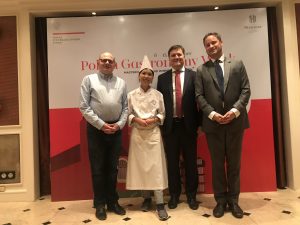 On November 8, our employees visited Hanoi University. The host was the Dean of the Faculty of International Studies, Nguyen Manh Cuong PhD. The Polish delegation was supported by the presence of the Polish Ambassador in Vietnam, Wojciech Gerwel and Maciej Duszyński. During the visit, a ceremonial signing of Memorandum of Understanding was held between the University of Warsaw and Hanoi University. Under it, UW students and staff will have the opportunity to travel under this bilateral agreement. In addition, employees will have the option of publishing in local magazines. After signing the contract, a scientific seminar was held during which about 100 Vietnamese students were present. Łukasz Gołota PhD told about the problems of the Polish transformation of 1989. Then the Dean of the Faculty of International Studies Nguyen Manh Coung gave a lecture on the Vietnamese experience of economic transformation in Vietnam. Ewa Rogowska, who is a Polish language teacher at the University of Hanoi, was also present during the seminar. 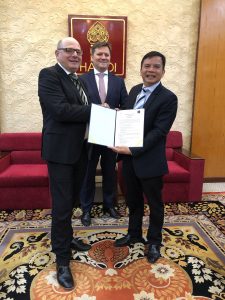 At the end of the trip, after a meeting at the University of Hanoi, the delegation went to the Diplomatic Academy in Hanoi. During the meeting prof. Rob Rabel from Wellington University in New Zealand and Maciej Duszyński from the Polish Embassy in Hanoi. The possibilities of joint publication by Polish and Vietnamese academic staff were discussed. 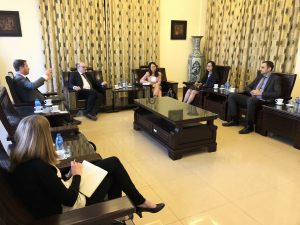 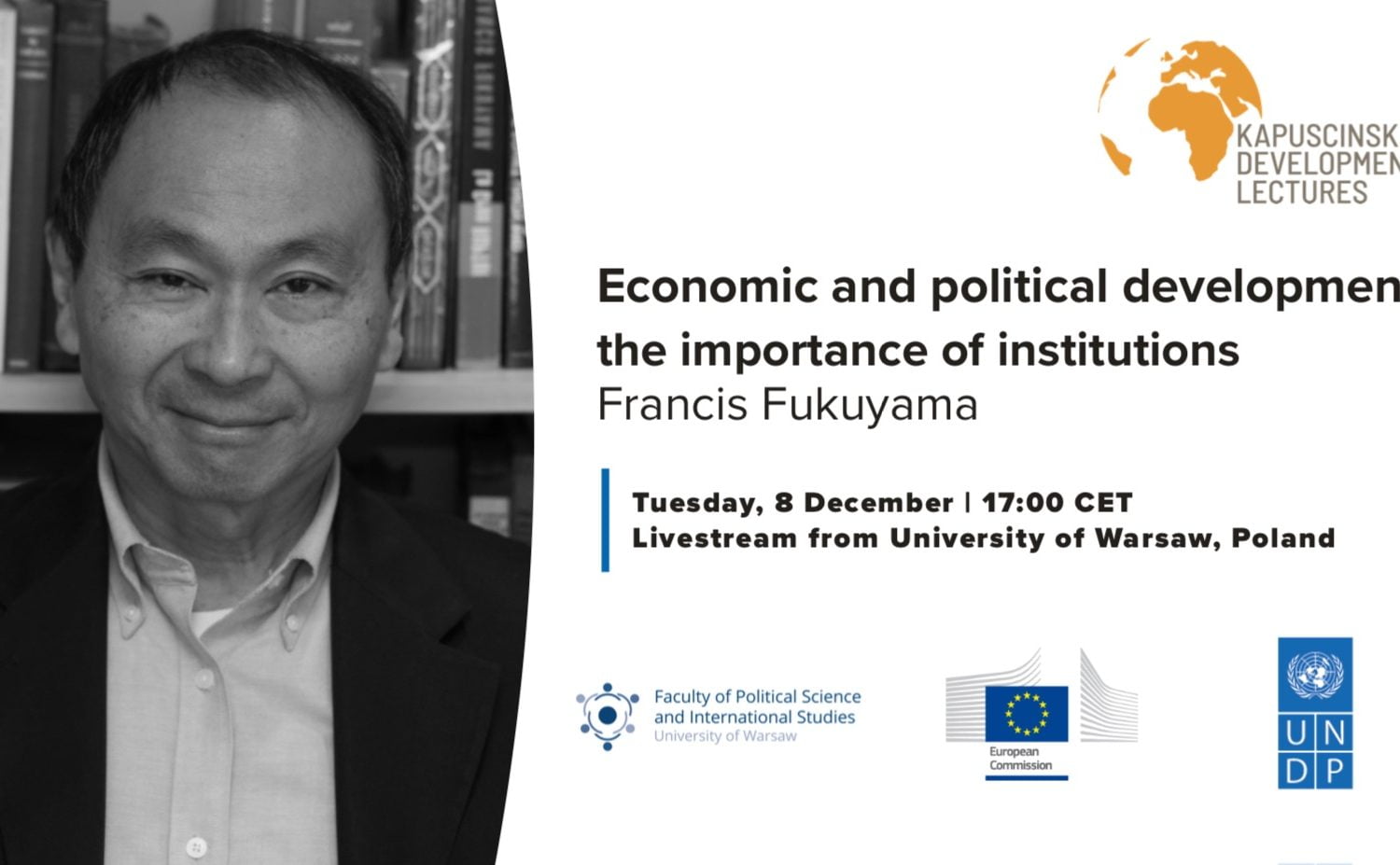 The lecture of Professor Francis Fukuyama 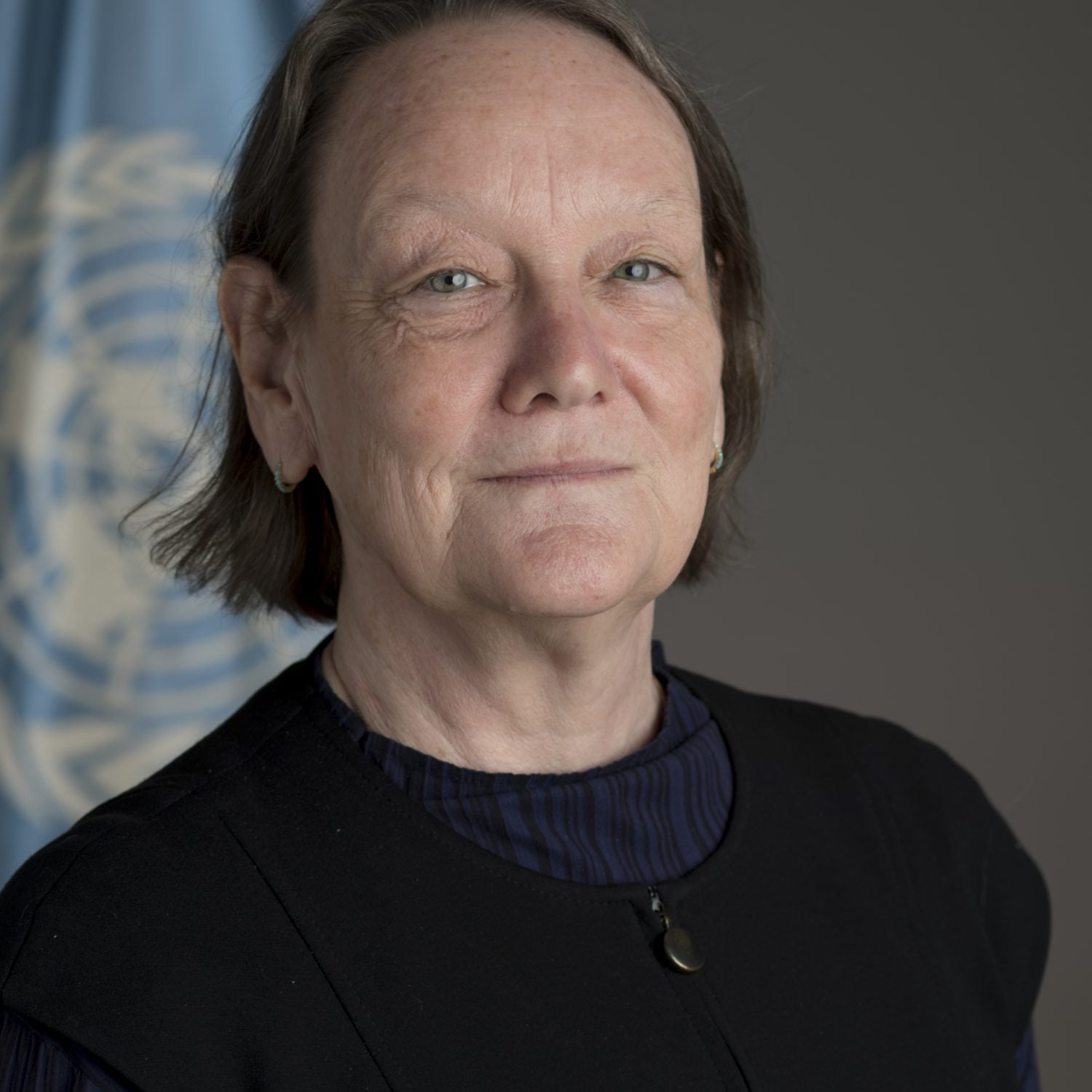 Portrait of Jane Connors, United Nations advocate for the rights of victims of sexual exploitation and abuse 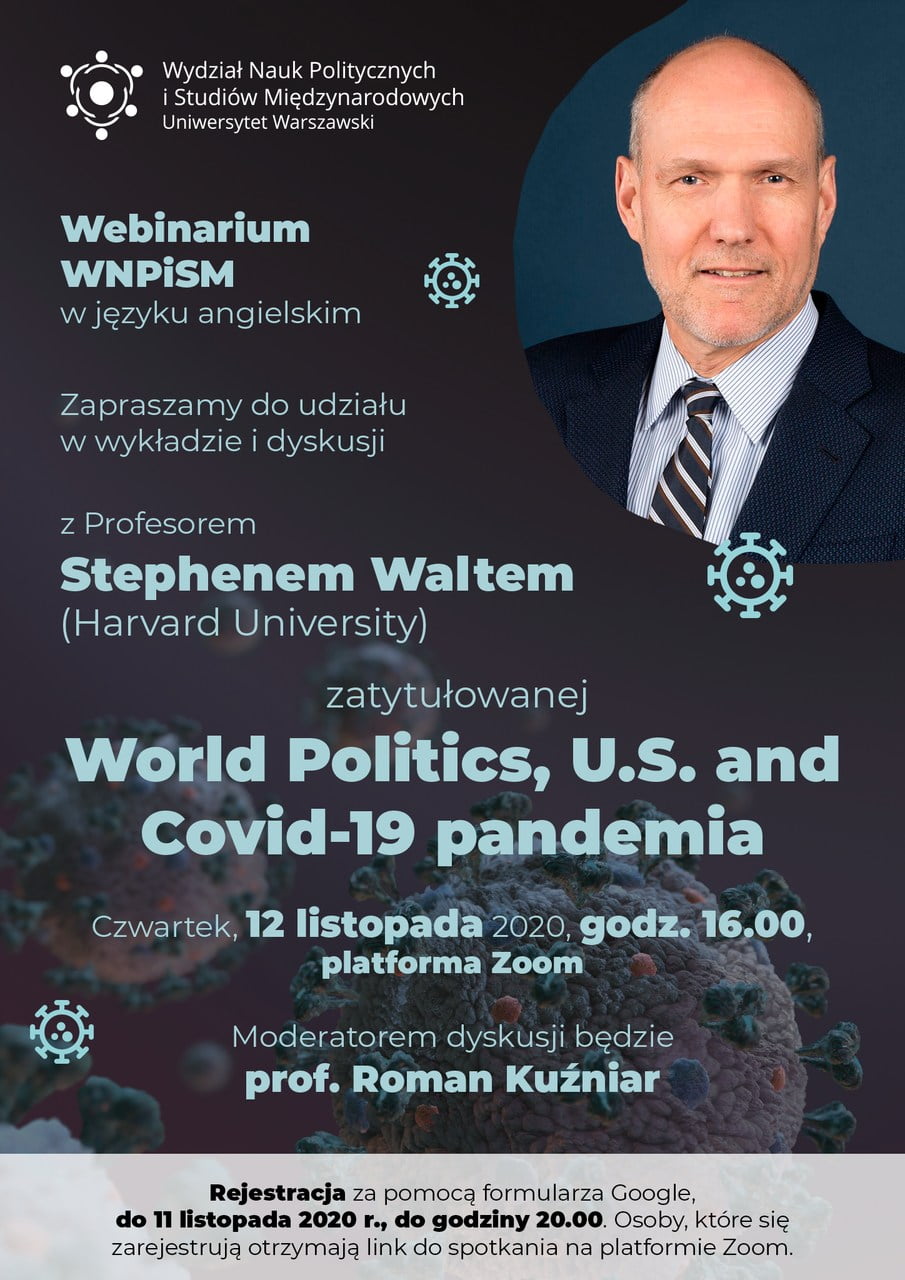